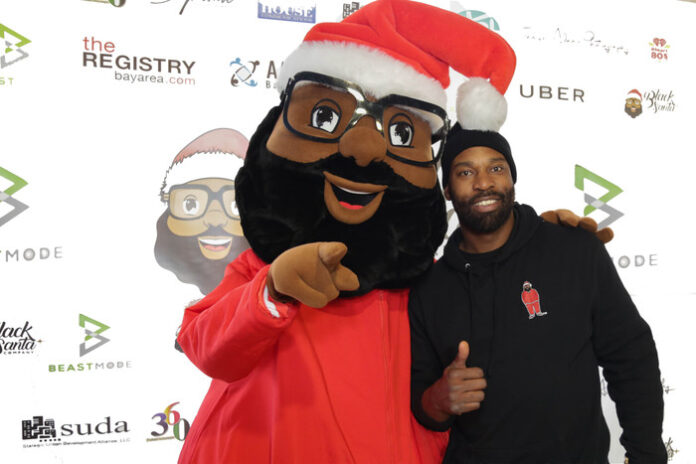 In his 15 year NBA career, two-time NBA All-Star Baron Davis was one of the most exciting players the league has ever seen. The explosive guard was known for his incredible quickness and dunking abilities. Davis was a cornerstone of the “We Believe” 2006-07 Golden State Warriors.

The team became the first 8-seed in league history to beat a 1-seed after dispatching the Dallas Mavericks in 6 games in the 2007 NBA Playoffs. The UCLA product averaged 16.1 PPG, 7.3 APG, and 3.8 rebounds per game as a member of 5 different teams.

Davis found much success after his retirement from the Association in 2012. He became a TV analyst, actor, entrepreneur, and philanthropist. He also founded an organization called Black Santa, with whom Dear Fathers has partnered for Season 2 of the podcast.

Black Santa is rooted in providing a diverse array of characters to tell relatable, modern stories. The aim of these goals is to inspire cultural change and better prepare the next generation for the future. The charity is also rooted in giving. Black Santa has held toy drives, celebrity basketball games, and parties all to benefit the organization and those it helps.

The concept of Black Santa was created by Davis to provide children of color with an uplifting and relatable character akin to Mickey Mouse rather than a negative, stereotyped character we often seen portrayed in today’s media.

“Why can’t (children of color) have the same opportunity to go to school and have characters that they feel represent them and speak more to their truths in life?” Davis said.

The record holder for the NBA’s longest shot is showing children who might be considered “long-shots” that they can achieve their goals with Black Santa’s “U Wish”. According to Davis,  the concept of U Wish is simple: “you wish it, you dream it, it will come true”.

Davis’ aim is to show black children the multitude of ways they can escape difficult situations. The 6-foot-3 NBA vet whose fans once chanted “We Believe” is now telling black children he believes in them.

While Davis works to help children all across the country, he also is raising two sons of his own at home.

“As a father, I just love my kids. I’d do anything for my kids,” Davis expressed.

He grew up in a home where his father was not around and works his best to always be present for his sons. This includes car rides to school, where Davis jams out to songs on the radio with them and talks about what is going on in each of their lives.

“I don’t want my kids to feel the way I felt about my dad,” Davis said

As his sons grow and get older, Davis wants to have a very open and close relationship with both of them. Not only their father but a friend.

“For me, it’s really trying to be their best friend and their homie, and a person that loves them so much they ain’t never going to judge them,” Davis said.

Check Out Black Santa by going to www.blacksanta.com and follow Baron on social media…