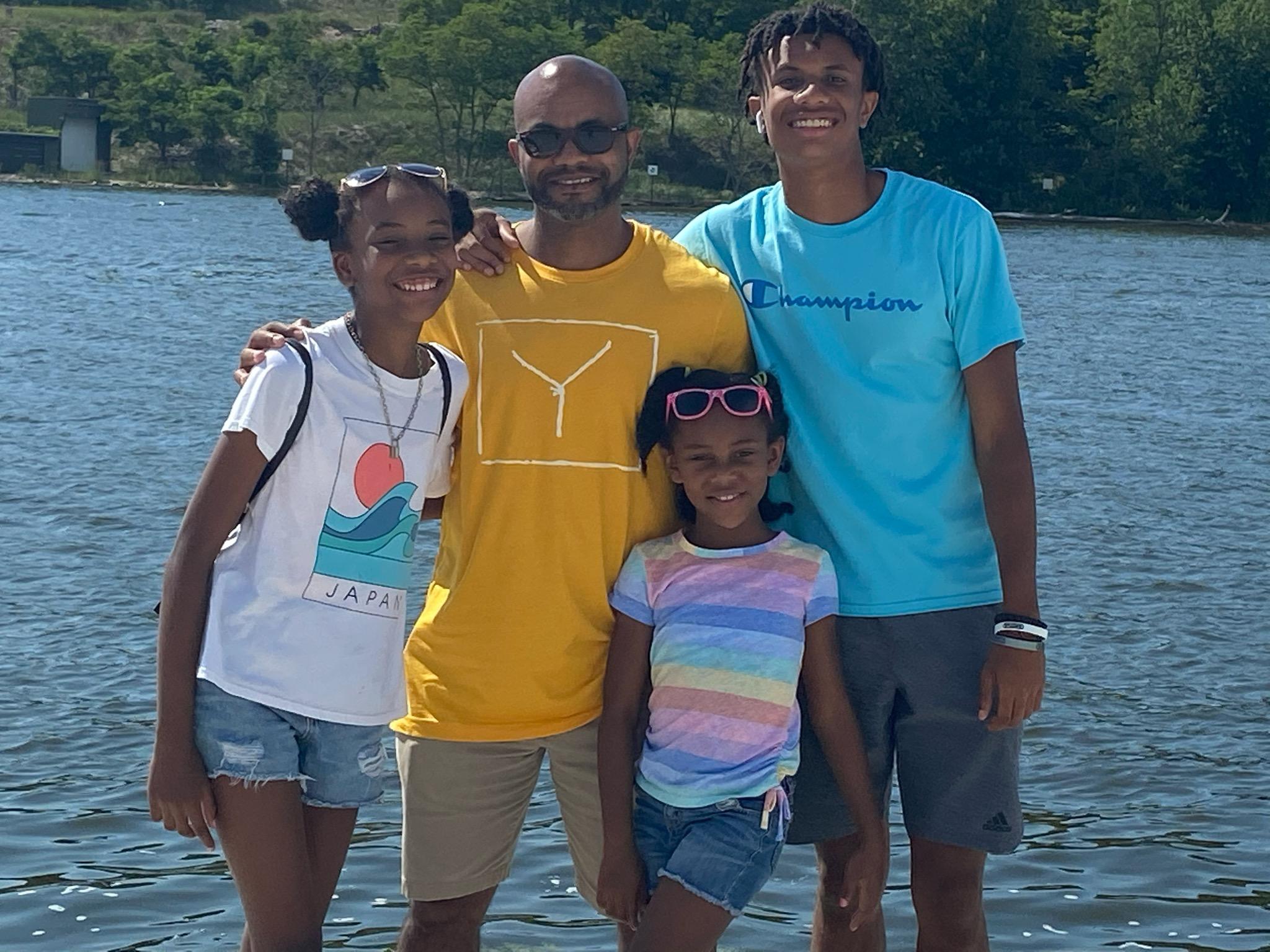 Give us a window into who you are, who is Louis Johnson?

I’m Louis Johnson, 46 years old and I live in the Chicago area.  I was born here but lived in Seattle 3 years during grades 5-7, then moved back to the Chicago suburbs.  All of my neighborhoods were predominantly white, so for a change, I wanted to attend an HBCU for college.  Hampton University was my choice and it was supported by my parents and my brother, all of whom went to Tennessee State University.

At Hampton, I studied biology and got bachelor’s and master’s degrees. From there I began working in the pharmaceutical industry in sales and then transitioned into research and development where the bulk of my time has been managing clinical trial operations.  I now work as an Operational Advisor for Medidata Solutions implementing computer/cloud based solutions for clinical trials. In addition, I have a consulting company focused on optimizing clinical trial conduct through management and training. I am also forming an organization that will promote diversity and equity in healthcare and clinical trials.

When you started your fitness journey, what immediate goals did you have identified? Where do you see your bodybuilding career headed in the next 5 years?

I started lifting in junior high and then through high school because of sports.  I ran track at Hampton so that continued through college.  After college, fitness was rooted in vanity, but I also liked the idea of running road races, out lifting people in the gym and being able to play pick-up basketball or flag football.  Later, it was because of health maintenance.  As for bodybuilding, I am not sure when I’ll compete again, but I am maintaining my workouts and keeping fit.  At my age, it would take 14-16 weeks to become “stage ready”.  To look the way I want, it would take me about 20 weeks. 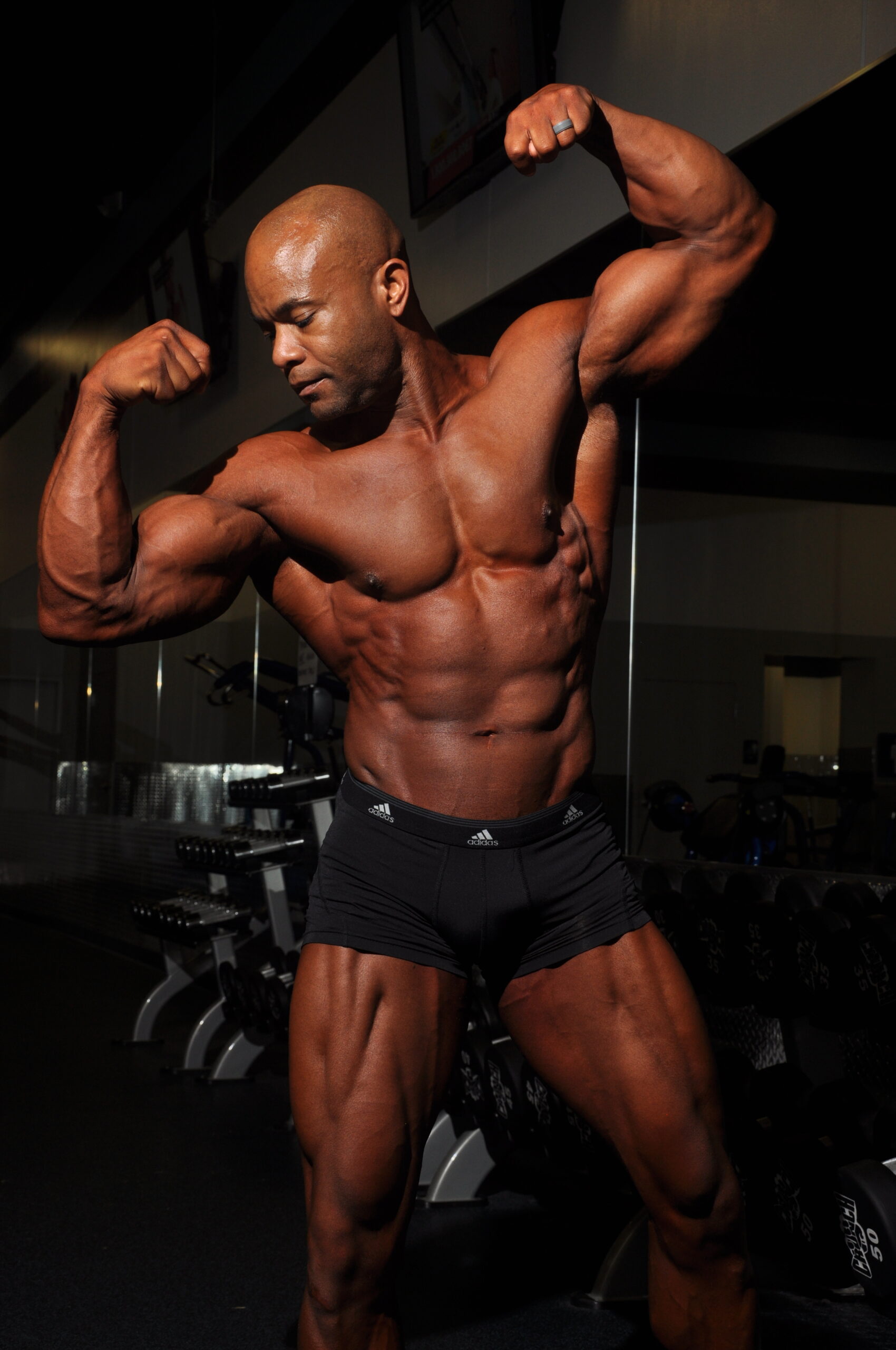 What’s wrong with the narrative displayed about black fathers and what things do you do to help change that narrative?

Broadly speaking, the media has portrayed black men as criminals, misogynists, ignorant and disloyal to their communities and families.  This characterization may be true of some black men, but it is indeed true of some men in every ethnic group. By focusing solely on black men, it gives the appearance that black men are fundamentally different than men of other races.  By extension, the negative messaging has given rise to the idea that black men are also bad fathers.

I am of the belief that black men need to be seen as contributors and leaders.  This can be done easily by the media and also by us as black men being visible in their communities.  Starting when my son was 5 years old, I coached his sports teams and tried to present myself as a protective father and then as a leader for the teams.  Most of the non-black players and families never had a black coach, teacher or boss.  I knew that I had a responsibility to carry myself properly. I wanted people to see my behavior as a contrast to what they saw on TV or in other media.

What was your fatherhood experience like growing up and how did that impact you today?

My dad was and still is very involved in the lives of my brother and me.  My parents have been married for over 50 years.  My dad coached our football teams, taught us a plethora of things in the home, how to treat women and ultimately, how to be a leader.  He taught the importance of taking responsibility and seeing things through to completion.  “Do it the right way the first time,” was a common phrase uttered in my house.  I find myself emulating my dad a lot.  I may not have agreed with everything, but I can humbly submit that everything worked.  I am passing those lessons down to my kids.

You’ve been a father for a while now, how would you describe your fatherhood experience so far?

I have three kids: a 16 year old son, an 11 year old daughter and a 6 year old daughter.  It has been rewarding.  I have done some things right and messed up on some things.  I can see that some of my good messages are being followed by my kids.  I can also see that some of my former football players have talked about my lessons about life what I coached those pee-wee teams. I still can make some improvements, but I am doing a decent job.

Name 5 characteristics you believe are important for every black father to embody.

1) Responsibility: Must be able to maturely take ownership of his role as a father and the leader of his family.  Understanding this will guide his actions.

2) Protection: Be able to protect the kids and the family physically and emotionally. Kids need to feel safe.

3) Guidance: Be able to guide and teach life lessons.

4) Compassion: Be able to be soft and tender when necessary.  Kids need to be able to drop their guards down and share emotions knowing that they are not being judged.

5) Vision: A good father needs to have a good vision for where he wants to see his kids and family go.  The vision helps the dad plan vacations for exposure and creating memories, secure jobs to keep the finances moving forward, and ultimately sets the trajectory for the children.

Who are 5 black fathers you’d tip your hat to? (can be personal, celebrity, etc.).

What advice would you give to someone that’s on the front-end of their fatherhood journey?

I would tell them to take note of the 5 characteristics noted in question 5.  I would remind them that they’re not the first men to become fathers and won’t be the last.  They should take note of the good fatherly behaviors they’ve seen and adopt those things into their programs.  If they see a family that sent all of their kids to college, they can borrow some of those behaviors.  Lastly, they can also take note of what they see non-black families do.  One of the greatest men I know is an outstanding dad.  He’s white.  I have borrowed A LOT of his fatherly characteristics and use them often.  Being a good dad is being a good dad.  Period.

If you could write a short letter to your father starting with “Dear Father,” what would you say?

I would thank him for what he has done for my brother and me.  We both grew up living a very nice middle class lifestyle.  Some would say we were spoiled.  We both have master’s degrees, never been to jail, we are not on drugs, not alcoholics and we have lived out many of our dreams.  I would thank both of my parents for that.  In fact, I have on multiple occasions.

Catch up with Louis: