Means the world , I tell people all the time I LOVE IT HERE. It means I could never settle for less I could never be average it means I can go above an beyond to make things happen because I’m setting that example for my daughter so that she’ll always know that. Being a father to me means I get to enjoy beautiful moments an create a path of success for my little one. Fatherhood is amazing man 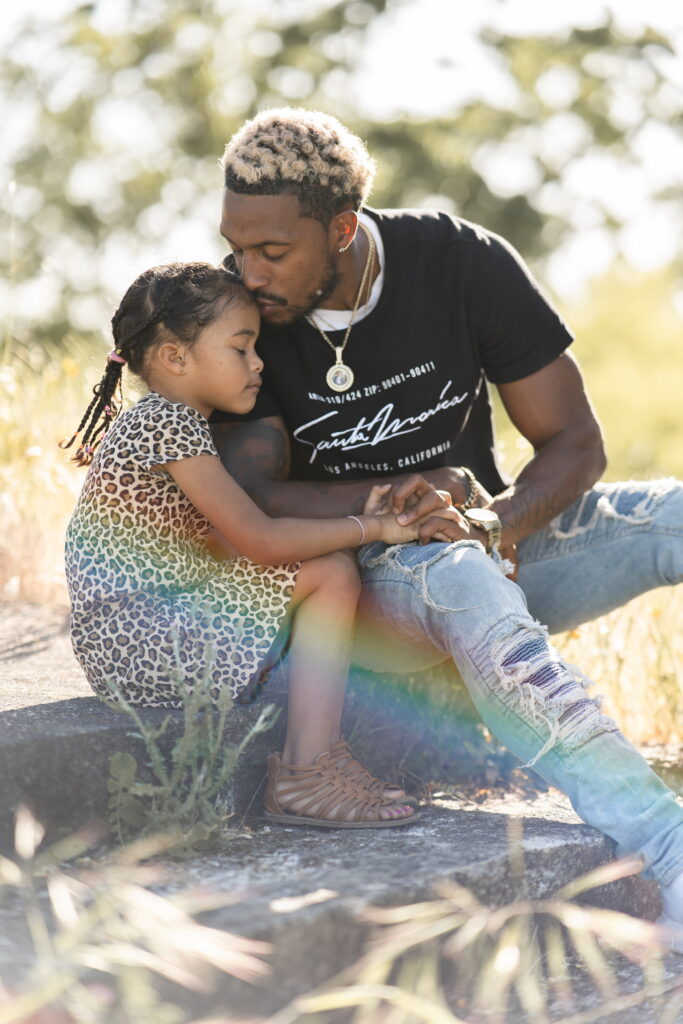 My father was never around, he was always in and out the system there were a lot of times where in my dreams I’m calling out for him, I needed him but he just was never really THERE I knew of him but as far as raising me no and it was tough because I feel it left an empty part in me that I wanted filled and it hurt a lot but as I got older I learned to not let it effect me I learned how strong my mother really was because it’s not easy Raising a man. I was hurt and upset for many years I felt some type of way any time I’d see him or talk with at times I would release anger out an it came from years of built up emotions especially after my mother was killed when I was 17 and he was still in prison, because even when he got out he wasn’t present like I thought he would be. But again as I got older I’ve learned to let things go and let them be as they are because life’s short and I’m the man Iam today

I took a lot of things from my experience I think that for the most part it was all negatives into positive situations whereas not having that father figure around an how it impacted me so now that I have my daughter I know the feeling of not having that father figure around and I could never not be there. Another reason is losing my mother hurt the most and my daughter is splitting imagine of her and reminds me of her so much that this was just a huge blessing and just like how my mom did so much for me I want to give that same love an affection to my daughter I want her to know that she’ll always have me here no matter what and that her father is always by her side. As kids an growing up we go through a lot of things and I think that we’re able to guide our kids in a even better direction from past experiences and it makes a difference in their lives. And it’s the little things like sitting down doing numbers and letters, painting pictures, drawing it’s the little things that mean the world to them and I try and show her that everyday

Yes of course , it’s never easy and I’m still learning to be even better an do better I’m not perfect there has been alot of struggles an it comes with your kid getting older meaning stuff they say , stuff they do and just how I deal with it how do I make them learn that it’s not ok an if it continues ? So it’s been alot of obstacles for sure but I think the most important thing for me was just having patience an Explaining things in a way they would understand now every kid is different so approach is going to be different but just with my daughter I’ve had my struggles an also learned how to deal with certain situations that come up and I’m still learning

For one and most importantly be present. I play Pro ball overseas so there are times where I’m gone for some months but I’m still present if that makes sense and when I’m home I’m there I’m showing love I’m doing different things because like I mentioned before it’s the little things an there like a sponge they absorb a lot. Read to your kid, have them on a routine But also be patient know that it’s not always going to be perfect. Seek out opportunities to bond and create memories

Dear Father, I am blessed an grateful that you gave me life if it wasn’t for you I wouldn’t be here. I also want to say that I forgive you for not being there and have learned to let go of a lot of hate I’ve had in my heart. But I also want to say thank you because it’s taught me what not to do when raising my daughter an to make sure she never feels what I felt and to always be there because it makes an impact on them as they get older. So thank you because it’s made me a better person an better father but at the end of the day you are still my father an I can’t fault you for your mistakes an decisions you’ve made all I can do is make sure I don’t make the same. Always love