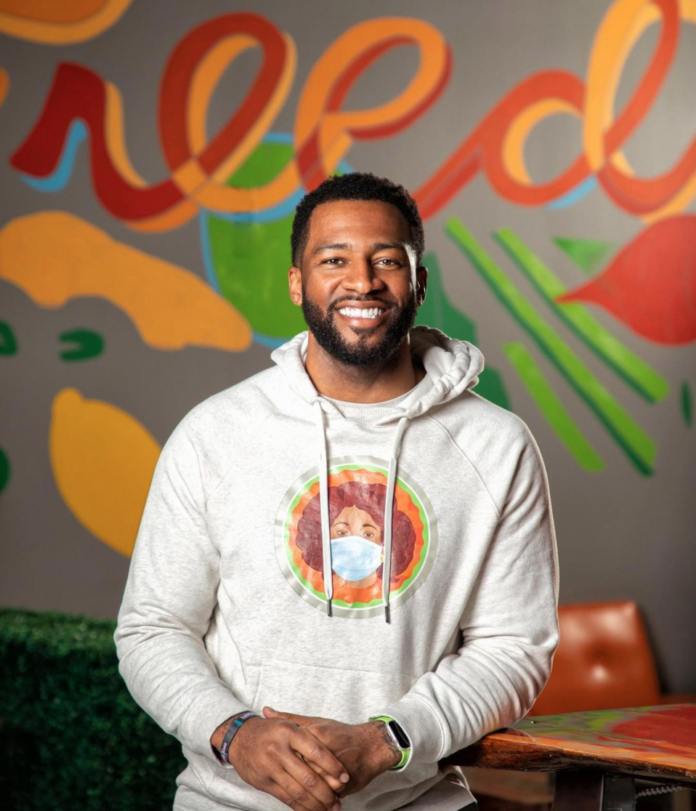 Black girl magic has become a commonly known phrase these days but what about black man magic?

Not as commonly used but also underrated as there are so many black men in the world today, that are embodying this sentiment.

The sentiment of being a pillar in the black community; as a father, as a man, as a friend, as a role model, and maybe even as an entrepreneur.

While there are many black men that can claim these titles, not many are doing it quite as effortlessly as Chris Goode.

Chris is a native of Kansas City, Missouri, and the owner of Ruby Jeans Juicery. A juice bar that’s not only a smashing success (their most recent location reopening inside of Brookside’s Wholefoods as businesses start to reopen since the start of the pandemic) but also the #1 rated juice bar in the Kansas City area.

I had the privilege of speaking to Chris over the phone in early April as he was taking a mental reprieve from the busyness of success in the Hollywood Hills of LA. Although it merits glamor, there was none more humble than Chris as he shared how much he was truly there to simply enjoy the peace and stillness of allowing his mind to catch up with his body as he grappled with the guilt of such serenity while his team was back home working.

As I felt the presence of his sincere heart over the phone and smiled at the sounds of birds chirping in his background is when I asked Chris to tell me more about his upbringing. What type of household was he raised in where he was able to become the man he was today? An entrepreneur, a father, a political activist, an advocate for mental health and so much more.

Was it his own father that inspired his molding?

With pride in his voice, he tells me no…and yes. A mixture.

He tells me that his father was out of the picture for the first 10 years of his life. Surprised at the lack of resentment in his voice, I ask him what that was like only for Chris to share that he’s happy his father took that time.

“My pops really did me a solid by not being there in those first few years, man. He popped in and out but for the most part, he was out figuring himself out. He had to take that time; my parents had us at an early age. So I respect that he took that time to figure out how to best show up for us. So with me having no male presence, it sort of allowed me the ability to be impacted by women. You know, my mom was a single mom with 4 kids and it was basically either her or my grandmother raising us. And my grandmother was the consummate grandmother – she loved her daughter through everything and was always there for us. But my pops did me a solid by allowing me to really see the beauty of black women. You know the essence of them. Seeing black women work so hard with grace was just out of this world. My mom had multiple jobs but we never felt the struggle. When I look back on my childhood, it’s with love, man, it was a joyful time.”

And what about when your father did come back into your life? I ask him.

“[Laughs]…it was definitely a change” Chris tells me. “My pops was a dominant force. It was really intimidating in the beginning going from you know all that female energy to now having this like alpha male figure in the picture. I remember thinking like “wow this man…he kinda a lot” [laughs] but when he stepped back into the picture it was because he was ready. He stepped back in and he was this entrepreneurial driven man with a beautiful spirit and that really started to shape me.”

So tell me about your son. You’re 36 and you’ve had the best of both worlds with your upbringing – how did (and is) that shaping your journey in fatherhood?

“Yeah, I have a 2 year old boy named Levin and when I found out about him I was just like ‘wow, ok so this is actually my turn now’ and it was a moment of asking myself: who do I want to be as a father to my son?

And that kind of shaped everything from there. Having him elevated my inspiration and ability to see myself because I now had this little boy who was basically saying ‘I’m counting on you’

As far as my upbringing shaping my journey, I’ve taken things from both of my parents, you know. With my pops, he gave me love by action, not affirmations. His love was in the details, you know? And I do that with Levin now by just being detailed with every single thing ‘this is where you put your shoes when you come home, this is how you make your bed’ I show my son the details without being too hard on him.

From my mom, I think that love of Christ and tenacity have come from her and through me into my son. There’s a song she used to sing all the time about Christ and now I find myself singing that same thing to my son.

And my own spin on things would just be the way I pour into my son every chance I get. Before I drop him off at school I remind him who he is and all that he can do. Kinda come full circle, you know”

Absolutely – elevating the mindset of our young kings is important, especially because mental health is so undervalued. It’s amazing that you’re instilling that self-worth in your son now but what advice would you give to black men struggling with mental health now?

“[sigh] It’s really about looking inward. Look at failed relationships, cycles that you may be in. Just look inward and ask yourself ‘how am I doing the work for me? How are you working on yourself?’

And I mean, I’m still learning mental health so I’m figuring this out too as I go but I definitely believe in therapy and recommend that. It’s hard to find the right therapist, I’m actively pursuing that myself but I’ve seen what stress can do and it’s important to find that outlet of taking care of yourself and working on yourself at all times.”

I couldn’t agree more. And in the spirit of working to change the narrative on mental health in the black community, what would you say about changing the narrative on black fathers in society as a whole?

“The narrative on black fathers is not one I can understand because the guys around me are so amazing. From my vantage point, there are more black men getting it right than there are not, so I really don’t know where that narrative comes from but I think it’ll take more platforms like Dear Fathers, to get the word out and rewrite the story.”

Absolutely! Little by little. So what’s next for Chris Goode? You’ve set a bar and you’re changing the narrative. What’s next on the horizon?

All I want to be projecting from my mind and my heart is abundance.”

Cheers to that – here’s to more abundance and changing the narrative.