The state of Florida is often known for its sports, resorts, and beaches; it is also a fun state to grow up in and flourish as a youth and some have even retired here. When I was growing up, I often played sports like basketball and football in my neighbors’ front yard until the streetlights came on. It was the early ’90s, and back then we did not have all the major social media platforms such as Tic-Tok and Instagram; we had our MP3 players, Myspace, and watched our favorite sports teams play football on television. When we were not all couped up inside, we would often pack up our snacks and blankets and head over to a FAMU football game in Tallahassee, Florida with the whole family. We would also watch our favorite professional football teams battle it out in the super bowl football games. One of my favorite players was former Atlanta Falcons quarterback, Michael Vick, and Philadelphia Eagles wide receiver Terrell Owens. In high school, I became more involved in the sport of football and even played a semester of varsity football as a wide receiver. I also liked watching other players play like former Oakland Raiders defensive tackle, Warren Sapp, and Philadelphia Eagles Quarterback Donavan McNabb but as I got older, I began to see fewer NFL players being seen in the limelight. Some players would become sports broadcast journalists or start a non-profit organization like former Tampa Bay Buccaneer’s running back, Warrick Dunn, but players like Fred Taylor caught my eye and opened me up to a new perspective of life after the NFL. 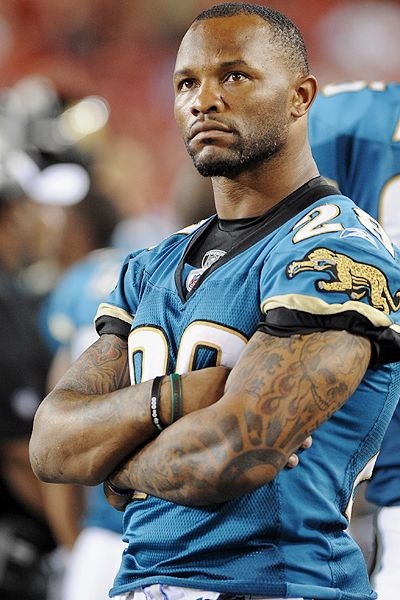 Fred Antwon Taylor is an American former college and professional football player who was born and raised in Pahokee, Florida. He was a running back in the NFL during the ’90s and 2000s for thirteen seasons. He played college football for the University of Florida. Fred was later then chosen by the Jacksonville Jaguars with the ninth overall pick in the 1998 NFL Draft. Fred Taylor had an amazing football career back then but as he got older, he often had played through head injuries, shoulder sprains, back spasms, hip pointers, severe muscle pulls, and even some nasty bruises; one injury in 2001, came when he tore his groin muscle off the bone and missed the last fourteen games. During the lost season, he gained the nickname “Fragile Fred, and that’s when he categorizes his lowest state and dealt with depression. Fred reluctantly sought a sports psychologist who continues to help him transform negative thoughts into positive images. During his seasons of playing, he often reached out to his teammates like Jones-Drew for advice and help to coach his teammates. When Fred played for the Jacksonville Jaguars and New England Patriots of the NFL, he became a member of the ten-thousand-yard rushing club. He also signed a one-day contract with the Jaguars on September 2, 2011, and then retired from the team. Fred is currently married to Andrea Taylor; they tied the knot in 2002. Fred had first seen Andrea through his camcorder while he was filming the scenery of Cancún. Andrea was a former girlfriend of Tampa Bay Buccaneers linebacker Derrick Brooks. Taylor once had contacted Brooks and begged him to set him up with Andrea and the rest was history as the saying goes. Taylor and his wife Andrea are blessed with five children, four sons named Kelvin, Austin, Inari, and Braylon, and a daughter named Nataajah. Taylor did not meet his own father until he was in high school; without a father figure, it was hard for Fred, so he often took cues on parenting from Andrea on disciplinarian advice. When Taylor was in college, his high school sweetheart gave birth to Nataajah.

After Fred was drafted, he found out he had fathered a son, Kelvin, who is thirteen at the time and in the eighth grade. He was six when Fred met him but since then Fred has tried to avoid the same situations that happened with his father. 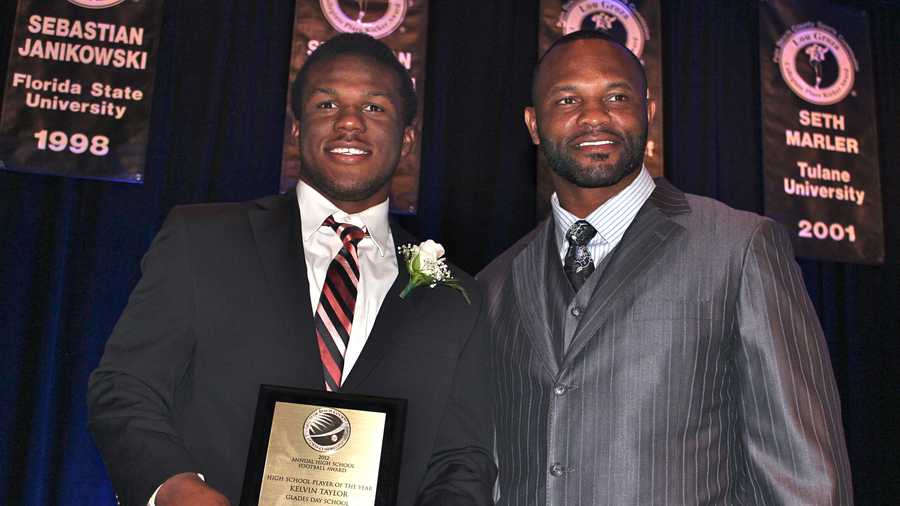 As a youth Kelvin would follow in his father’s footsteps and started to play football at the young age of seven; being a student of the game he would watch his father play for Miami and being so inspired by hanging out in his father’s locker rooms and hoping to one day rise from his father’s shadow. One of his dad’s quotes is to “Trust your eyes.” When Kelvin got older, he began to earn his stripes by attending Glades Day School in Belle Glade, Florida. In his junior year, he broke Emmitt Smith’s Florida career rushing yards record and for his career, he earned 12,121 yards and 191 touchdowns. Taylor was then drafted by the San Francisco 49ers in the sixth round of the 2016 NFL draft; he spent some time on the 49ers’ practice squad before being released in the middle of the season. Taylor was also picked up by the Seahawks for a short period and was placed on the practice squad, and later joined the Kansa City Chiefs. He spent four days on the Chiefs’ roster before being released. Kelvin is currently signed to the Atlanta Falcons playing as a running back.

Today, Fred Taylor and a few of his NFL associates such as former Denver Broncos wide receiver, Brandon Marshall host a new podcast series on YouTube along with former Miami Dolphins linebacker Channing Crowder and former Cleveland Browns, wide receiver Chad “Ocho-Cinco” Johnson. The show is building a lot of buzz on the social media waves and the show is becoming a hit with its sports comradery and debates. I Am Athlete is in its second season and has over 199,000 subscribers; it streams on YouTube weekly and hosts current and former pro athletes and discusses real issues surrounding the sports realm. I Am Athlete has covered topics such as life after the NFL, COVID-19, and CTE in the African American community, which stands for Chronic Traumatic Encephalopathy and is a degenerative brain disease found in athletes, military, and veterans just to name a few. One of the biggest episodes was when the quarterback for the New England Patriots, Cameron Newton blessed the show with his testimony. Cam Newton goes on to discuss issues of getting COVID-19, his entrepreneurship with his new cigar and lounge business, and being a free agent. I Am Athlete also covers an episode on a subject that has been slept on for years such as mental health; in this episode, each cast member addresses rates of their current mental health status from zero to ten. For instance, when it came to Fred’s turn to share, he states that he is an eight. He speaks from a “Mental fitness” standpoint and often does self-checks of his mental state when he looks at himself in the mirror stating “you good? He also has a good support team that stands by him when dealing with life’s trials and tribulations such as the passing of his friend Vincent.

Fred Taylor was a great player on and off the field. When it came to sports, he was competitive, passionate, and a scholar at football. As a family man and a friend, he is also competitive but always finds a way to make you smile and laugh at yourself. Fred’s ability to press forward when he faces hardships is a great characteristic to have.

He is a father that “dads different” because he has lived a life full of ups and downs but remained optimistic about his circumstances;

Fred Taylor was blessed to play the game of football and to see that his son is making a name for himself is inspiring. In this trying time of quarantine, men and women need an outlet to discuss their concerns about mental health and other subjects that empower both parties to be great.

Brittany Davis says of her Dad “I had a best friend from birth.”