NFL Social Worker Devon Lewis Provides Strength and Peace for the Raiders, the Youth, and with His Son 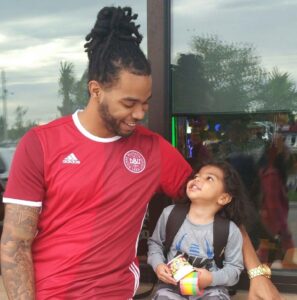 Meet the “NFL Social Worker”, Devon Lewis, who has incredibly transformed the trials in his life into triumphs. As an ex-professional football player, he has watched his experiences come full circle while fulfilling his passion of serving others, and give back to the team that he originally played for—The Raiders. Devon mentioned that the largest driving motivation in this journey is his son, Samson. Even while navigating the rare syndrome that his son was diagnosed with, Devon views fatherhood as an incredible experience that gives him purpose and fulfillment in life. 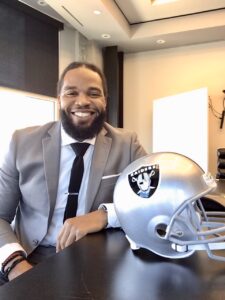 Devon was born in Brooklyn and moved to Palm Beach, Florida at age five. In this “football mecca”, Devon fell in love with football, especially as it provided structure and useful role models in his life. Devon instantly knew that his dream was to play in the NFL. Devon had the opportunity to play football in college at the University of Louisiana at Lafayette, living out his dream, and serving as the team captain. During his last year, he was preparing for their championship game when he got injured through a playful accident just moments before the game. He could not play in the championship game.

Over time, Devon healed and was given the opportunity to be picked up by the Raiders. Despite such excitement, he was cut from the team three days later, and had to head home to his newly born son. From here, he became passionate about starting conversations around mental health, which led him to create Inspiring Youth Services. He then went back to school for his Masters in Social Work (MSW) and navigated learning about business and social entrepreneurship to truly make a transformational impact on the community that he serves. Devon had a specific passion to be in sports while providing education around mental health. This aspiration was manifested when he met a colleague at a conference in Texas, and after skydiving was sent the job description for a social work-based position for the Las Vegas Raiders. Devon applied and was hired in working for Alumni Relations. Devon saw the full swing of his commitment to the Raiders, and the alignment in how he was meant to be connected with the team.

Devon mentioned that ever since he was five years old he has been preparing to be a father, as he saw it as one of the greatest joys to look forward to. Devon mentioned that he experienced many layers of fatherhood that he could not predict or plan for. While school or jobs bring a certain outcome, fatherhood will always have unpredictable outcomes.

When Devon’s son was being born, he put everything on the back burner, mostly because he was having complications at birth. Devon was incredibly grateful to have such a close relationship with his son to be present for these moments. Over time, Devon’s son was diagnosed with Autism, and then was diagnosed with a rare syndrome that causes developmental delays. Devon always evaluates what the odds could be that this would happen but learns to navigate the odds through support groups and his career path.

Despite all of the odds, Devon has an incredible experience as a father to his son. When he found out he was having a boy, he looked through the Bible for names and chose Samson. Devon is also Jamaican, so he chose the name that is a symbol of peace in his culture – Marley. Both he and Samson have locks and have not cut them since he was born to symbolize the strength depicted in Samson within the Bible. He is grateful that this journey of fatherhood has given him fulfillment and makes him passionate within his career. Devon mentions, “I wouldn’t be where I am without him [Samson]”. 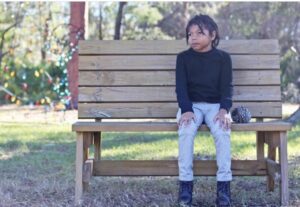 Devon loves that he has this unspoken bond with Samson that he doesn’t have to talk to communicate with his son. He believes that most, if not all fathers, possess the ability to connect with their children like this and sees this as such a powerful experience. Devon also mentioned that fatherhood gave him purpose. With the journey of his son’s health pairing with his personal journal of healing and developing his career, he recognized that having his son completed his purpose in life and helped to make things connect. Being a father made him passionate along his journey, even when he didn’t reach his true passion yet. Devon also appreciates that fatherhood allows him to be an example to his son and to supporting communities. As he didn’t have the opportunity to see men being fully emotionally present, he wants to demonstrate that for his son to the fullest extent. 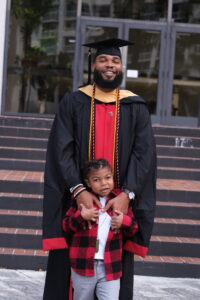 1) “Black Fathers are absent.” Black fathers may not live in the house, but they are quite present in their children’s life.

2) “Black Fathers aren’t affectionate.” Black fathers are very expressive when they are allowed the space to express.

3) “If you don’t want to be with the mother of the child, you don’t care about the child.” Devon recognized that there was no peace in competing and proving things to each other when cultivating a co-parenting space, so it is important to focus on what is best for the child and pour into that.

Devon mentioned that his number one takeaway from fatherhood is healing. He disclosed that he was once hurt by fatherhood during his upbringing, but he recognizes that there are a matter of choices that aren’t about him, but more importantly about healing father wounds. Devon reflected, “it’s never too late because I’m still somebody’s son.”

Devon’s remarkable journey reflects as incredible vessel to the youth he serves, the team that he assists in transition, and his son that he raises. His faith, spirit, heart, and ensuring passion has the potential to bring so many in the upcoming generation to healing and restoration–things that are especially needed in the lives of young black youth. Even more, Devon continues to work intentionally to provide Samson with the best life while serving as the most humble role model each day. “It’s not about what I’m giving to my son, but what I am being to my son.” Now, that sounds like a true MVP.

To learn more about Devon Lewis, follow on IG @nflsocialworker.