Bonton Farms “Master Gardener”, Quincy Bradley, Inspires Sustainability and Transformation in the Community and in Fatherhood

Meet Quincy Bradley, a Dallas Resident and an urban farmer with Bonton Farms. Bonton Farms started out as a small lot of land and grew into the Bonton Market and 40 acres of land. This land has the mission in “restoring lives, creating jobs, and igniting hope in a once forgotten and neglected neighborhood with some of the most marginalized people”. Bonton Farms holistically “feeds” people in urban communities to assist them in growth from their circumstances. On the surface, Quincy is a well-known rapper, yet his experiences have transitioned him into using urban farming to not only heal personally, but to heal and inspire the community as a whole. As an activist, he continues to seek ways to increase sustainability and holistic wellness within the youth, the black community, and his family.

Quincy mentioned that he has always been an activist and transitioned to become involved in political activism. Shortly after, he had a life changing gun shot by another person that almost killed him. The doctors were able to place a fake bone in his foot, but this meant that he could not do sports anymore, which was a passion for him. In the midst of the heavy season for him, Quincy researched ways to stay in shape without physical activity. He found that fasting was useful, and that it in fact changed his life. 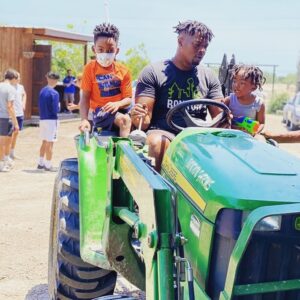 Quincy has a passion for working with kids, so in the midst of his research, he also learned that the greatest impact among the behavior and well-being of kids had to do with their nutrition and the food they consumed. He recognized that a lot of young kids consume a high amount of processed and fast foods (for a multitude of reasons), and he feared for their health. Quincy quickly felt the call to take a revolutionary action and look into urban farming for such communities. After the Councilman in his District won the election, he ran to tell Quincy that they found land for the urban farm that he mentioned and gave him information to get started. He toured the land and realized that he just wanted to work hard, give to his community, and help make this bigger than him. From there, he put his right foot in front of his left, and is now known in Dallas as a master gardener, as well as still be the man his father raised.

Quincy’s father is a very powerful role model in his life. He mentions that his father was not afraid to show affection at all and had very open conversations with him. His father would even hold family meetings with him and his brother, and even when it was sometimes annoying, he recognizes the value of it in his interactions today. This role model helped to shape the father that he is today and how passionate he is about dismantling the negative narratives around black dads.

When Quincy was younger, he was actually embarrassed that he had a dad in his life because most of the other boys around him didn’t. He recognized how certain traumas become so normalized within black men that having something healthy seemed out of place. He is quite reflective on this narrative and other narratives that have harmed the mental and emotional wellness of the black community and has released this in farming and gardening. He now recognizes that his father was the true essence of a black man and well respected in his community. His father was the President of the Boys and Girls Club in Arkansas while being raised in the era of deep segregation. Quincy mentioned that his father picked cotton at 13, drank in separate water fountains, yet still raised five strong black men, and that oppression didn’t take his dad’s spirit. This deeply inspires Quincy today in how he addresses activism within the black community. He also aspires in continuing to be such a positive role model for his son in the same way that his father was for him. 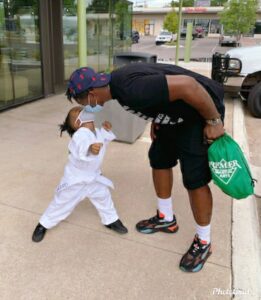 Quincy prefaced that although there are stereotypes that can be binding for black fathers, he does not want to invalidate anyone’s experiences on who have been impacted by the said stereotypes.

– “Black Fathers make the choice to not be in the life of their child”. Quincy recognizes that lots of systemic structures have caused black men to struggle with trauma and social relationships. He mentions that the system has never met a black man, they have just met a n**** because that is who they have created. When there have been generations of negative narratives engrained in the black man’s DNA and passed down through each generation exponentially, there is very little room to see who the black man would be if all of this trauma was not pressed upon them over the years. Therefore, while there isn’t an excuse for not being there, there is a lack of emotional cognition to understand what it means to be there. He recognizes that the relationship with his father has been an incredible influence to be there for his son since the beginning, and to show the highest level of transparency and affection. He recognizes that not all black men are afforded this and that it will take extra work to gain this capacity. Yet, black fathers want to be in their child’s life.

“Black Fathers are emotionless.” Quincy is passionate about expressing emotion to his son to ensure that they create a safe space for each other. He recognizes that sometimes black men struggle with showing their emotions because there are very few places to do such safely.

“Black Fathers aren’t providing enough”. Quincy recognizes that financial provision is an essential component of fatherhood, but he loves that black fathers provide so many intangibles that are unique and highly necessary to the development of the youth. 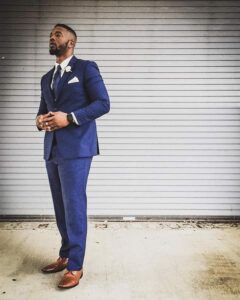 Quincy recognizes that as a black man, the system has limited black men from the areas in which they can provide assured sustainability for their family. Yet, he knows that knowing how to farm can always provide food and nourishment for his family, even through a pandemic. He mentioned that numerous studies support that putting your hands and feet in dirt provides energy for your body to enhance holistically. Therefore, gardening brought Quincy to a place of completion after numerous hardships and a near death experience in his life. Gardening also helped Quincy to believe in God again, as it transitioned him out of his religion to retaliate and brought him into a season of giving things to God and trusting that He can transform things, just as he sees things growing and transforming every day on the farm. He used these realizations to partner with local professors and write a curriculum on gardening and life skills to teach to kids in his community. He aspires to help the next generation understand the necessity of returning to the roots of your foundational soil to grow, both with nutrition and within your personal life. Quincy consistently reflects on the premise that in the Bible, God created a man, woman, and Garden, which he sees is for a specific reason. In the end, “God is the ultimate Gardener.”

Love Most About Being a Father

Quincy loves that in his son he can see a reflection of all of the possibilities that may have or have not happened through him. He loves more that his son teaches him as much as he teaches his son, if not more. He is excited to be completely vulnerable with him while still guiding his son firmly as a parent, and that both is just as necessary because it helps them both to grow even more. Most of all, he grateful that he can be a positive role model to his son, and to others, that one can have a vulnerable, loving, and healthy relationship as a black man. 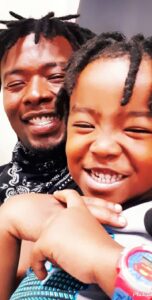 Is there a famous father that inspires you? “My daddy, Only him. I would never give that to anyone else. He is my superhero.” – Quincy

To learn more about Quincy and his story, farming, and political activism, find him on IG: quepmusic214.